Working on a variety of roofing materials, Pestana Roofing offers residential roof repairs in Southeast Florida and surrounding areas. Call us for any of your roofing concerns and let our qualified roofers repair your roof for you. Not sure which kind of roof suits your property? Read the following information we have compiled about the common roof types in Florida.

Made from lightweight and durable material, metal roofs are often used in both commercial and residential buildings and can last up to 30 years. Metal roofs are proven to be resistant to fire, wind, and hail, which makes it the common choice for roofing material. For improved functionality, they can be applied with high reflectivity coatings which aid in a more economical energy usage. They can also be recoated easily to change the metal roof color.

Tile roofs are a durable and beautiful alternative to traditional roofing materials. It comes in a wide array of design and colors that improve the overall look of the exterior. Tile roofs last longer than most materials, and with proper maintenance, a concrete tile roof can minimize the need for a reroofing. With the highest fire-resistant rating available, tile roofs can be your first choice for a safe, energy-efficient, and cost-effective roofing with better insulating properties.

Modern flat roofs use a continuous sheet covering. Sealants and adhesives are often used for bonding multiple sheets. They may also be cut to make room for vents, conditioner stands, and plumbing stacks.

Considered the easiest to install among other roofing materials, shingle roofs are usually made of asphalt and can last for up to 50 years. They come in a variety of colors and styles and can be used on any type of building. However, the weather in Florida is not compatible with a shingle roof, which will probably make you opt for a reroofing service before your roof warranty ends. 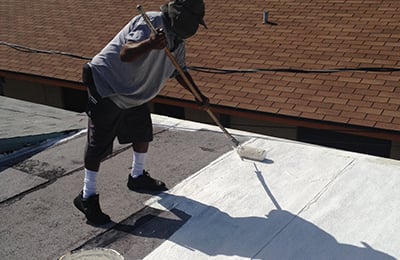 Experience the difference when you choose the roof repair services offered by Pestana Roofing. We guarantee to make your roof look just like new and provide you with improved roof stability. Learn more about how we can help you by calling us today.

For many years, Pestana Roofing has been offering fast and effective roof repairs, making us the preferred local roofer in Southeast Florida. Our specialty not only includes fixing damaged roofs but also helping you achieve peace of mind by keeping you safe from hurricanes and other calamities. Read the testimonials of our satisfied clients to learn more about the quality of services we offer.

“Dear Al, thank you for repairing our roof leaks. You came, you ripped off the old roof and, repaired. It seemed no effort for Jose, your chief roofer. You did the job neatly, efficiently, and with confidence that we will have no further problems. You were so right. You get 5 stars. Both you and Jose are considered family! You can’t be held in higher esteem! P.S. Hope Jose got his tooth fixed!” – R. & L. Gerhardt

“Could not have gone better! Everything went exactly as described, his entire crew, including Al and his father, showed up every day until the job was completed. There was not a single glitch and now, five years later, everything is still perfect. You simply cannot go wrong with this company. The fee was midway among all the quotes we got and it was of very good value.”

“He suggested that we repair the roof and not get a new one right now. He patched the roof and was able to use the existing tiles to cover the patch. He saved us the cost of a new roof - $17000. He said the repair should last another 5 years. He was very honest. When the time comes to replace the roof, we'll use him!”

“It was excellent! I got estimates from three companies and his price was the best. He was very professional and knowledgeable in his field. He came out when he was scheduled to, got the work done, and did it well. He was also very patient and I praise his work. I would definitely recommend him to others.”

“My husband patched a leak years ago, shortly after we bought our property in 2009. It held for a while but once renovations began in the bathroom, the leak resurfaced. We had used Pestana Roofing before, to re-roof a section above our kitchen, so we called them, again. They worked us into their schedule, got to the house promptly, and finished the job within a couple hours. The crew had been consistently friendly, experienced, and professional, and both jobs have held through countless rain storms. I highly recommend them for any roofing issue, big or small.”

“The repair person was very knowledgeable and provided very detailed information about what needed to be done. He made the repairs and took photos before and after so we could see the damage and what he had done to correct it. It was done to our satisfaction and he was a pleasure to work with. Pestana roofing had done an emergency repair about a year before in another part of or roof which is why we called them again. That previous experience was excellent as well. We wholeheartedly recommend this company for their responsiveness, efficiency, and their treatment of us as customers.”

“Found that our roof had some rotten wood and leaking problems when we had a job estimated for the painting of our home. Called other roofing companies who gave us several different dates they'd do the job (Kept changing the date they'd start due to various reasons NOT WEATHER RELATED!). We were very tired of dealing with roofing companies at this point. We were beginning to think that we'd never get the roof repaired. WE HAD TO GET THE HOME PAINTED...THE PAINTERS WERE READY TO START...I am SO GLAD we finally contacted PESTANA ROOFING in Lake Worth, Florida after having other roofing companies fail to show and make excuse after excuse why they "can't make it today”. The owner of PESTANA ROOFING, Al Pestana, came out to do the estimate and was an absolute professional. I consider myself a very good judge of character, and knew within minutes that this company was the right company. His crew responded to do the work much sooner than I expected, even though he had advised me the date he would be able to start (showed up ON TIME!). I've NEVER EVER seen that happen before. Turns out, after the work began, that the job was slightly more involved than originally predicted, but Mr. Pestana stuck to his estimate. The crew showed up and immediately assessed the situation and made sure that they had the right materials. They matched the old shingles almost perfectly, even though they have been through almost 12 years of HARSH South Florida SUN and 2 hurricanes. I defy anyone to find the roof repair. The crew was amazing to watch and did an outstanding job on a very hot day (Gets very hot just before a so-called "cold front" moves in to S. Florida). The job is finished, and there is no sign of anyone working on our roof. It is guaranteed not to leak and I'm certain it won't after watching how they fixed it. The crew cleaned up after the job and left no signs they had been here. We could not be more pleased with the price, the professionalism of the company, and the work they did. I would highly recommend and already have recommended them to my family. If anyone ever asks me, "Do you know anybody that does good roofing repairs?", I say, “No problem. PESTANA ROOFING.”